At least half of you are probably gasping in horror right now–I can hear you wailing from every corner in Blog Land.  Just bear with me.  I used to scrapbook–in fact, I loved it.  Scrappers can be a little, shall we say, militant in their passion.  I was a Scrapbook Evangelist–I thought everyone should be doing it, and I told them so.  But then a funny thing happened:

The third child, for me, was the deal-breaker in which things such as personal hygiene and hobbies involving adhesives became a thing of the past.  I gradually fell farther and farther behind in my scrapbooking, even with my pages becoming simpler and simpler.

I had photos stuffed in every nook and cranny in my house.  I was forgetting which child was in which pictures (Dryer babies all look alike).  The months whizzed by, the pictures accumulated, and the scrapbooking supplies moved deeper into the recesses of the closet.  The turning point came a year ago, when I realized I was purposely taking fewer pictures so that I wouldn’t add to my growing stash of pictures.

After some deep breathing, I realized that if I turned in my photo cropper, I would still be a good mom.  If my children’s photos were not decorated with fourteen thousand dealy-whoopers and doo-dads, the very hounds of hell would NOT drag me away.

And so I purged.  I gave it all away, and I bought these little jobbies instead: 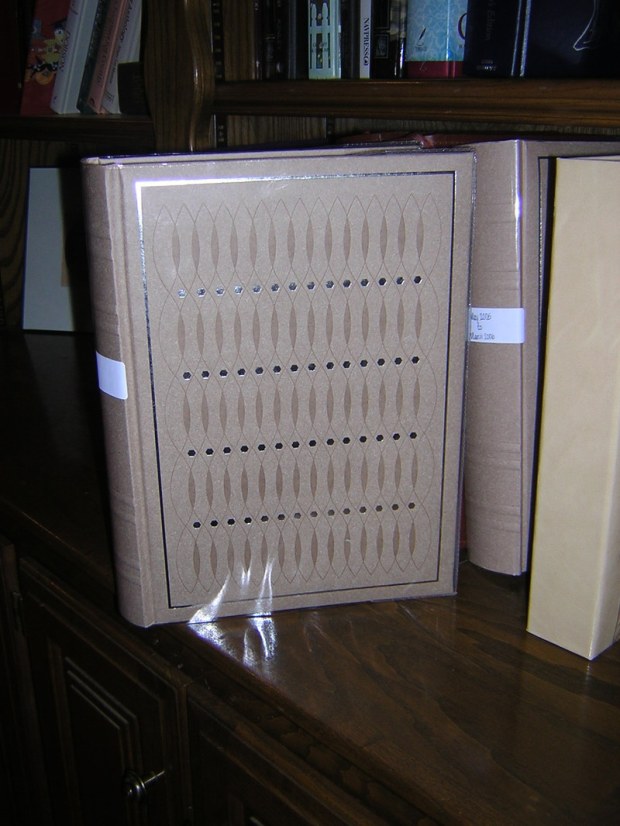 They’re photo-safe (of course…I’m not that reckless!) photo albums for 9.99 at Wal Mart, and the photos slip right in the side.  There is a place to write (In a regular pen!  Oh, the freedom!) a memo about the date, the event, which child it is, etc.  Regular photo albums.  I emerged from my scrapbook bunker amazed to see they even made these anymore.

And I LOVE it.  The pressure is off.  I was able to catch up on every single photo in my house by devoting a couple of days to the task (working off and on, mostly off).  Best of all, I know that my photos are all in one place, and labeled.  My kids LOVE to sit down and flip through the photos, and you know what?  They don’t miss the fancy stuff at all.

So, my dear scrapbookers, please know that I LOVE to look at your work.  I think it’s a fantastic hobby, and I may even rejoin your ranks someday when the kids are older.  But for now, my photos are safe.  My memories are documented.  And my kitchen floor is free from zillions of little hole-punched stars and clovers.

64 thoughts on “Why I’m Not a Scrapbooker”