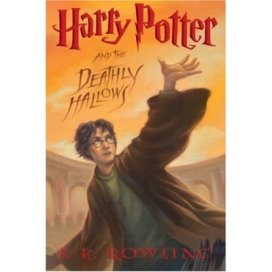 I have been on a Harry Potter reading marathon since early summer.  After I read the third book, years ago, I decided I would wait to read the rest until the whole series was out, and I could read them straight through.

So back in June I re-read book three, and then I began reading the new stuff.

And you know, if you are a Harry Potter junkie like I am, that the thrilling stories and lovable characters will get so much into your head that you start identifying with them just a leetle too much, sometimes.  I have dreamed about them two of the last three nights.

This was evidenced to me the other night, when I collapsed on the couch after a long day, and I realized that the remote control was across the room.  And I AM NOT KIDDING EVEN ONE BIT when I tell you that my initial thought was to shout, "Accio remote!"

I should probably get out a little more.

Last night I finally finished the last book in the series, a feat I accomplished with the help of a great deal of caffeine and a very large box of Kleenex.

If you have never read the series, please do not read any further.  I’m serious.  Big time spoilers ahead, because I HAVE TO DISCUSS THIS.

*humming and tapping my foot*

Nice weather we’re having, isn’t it?

I know I’m arriving a little late at this party.  Much of the Potter-loving world has already hashed and re-hashed this book.  But you know what?  I HAVE to talk about this book, because OH MY WORD.  That last one absolutely wore me out.

Just as Rowling promised, all the ends were tied up so neatly (in my opinion), and all the major questions were answered.  There were still a few things I wondered about, though (and this will be totally stream-of-consciousness, because my mind and heart are still racing).

Even though we caught another glimpse of Petunia Dursley in the Pensieve, I couldn’t help but find myself wanting to know how and where the Dursleys wound up.  All along, I suspected the series would end with Petunia somehow re-entering the magic world and giving her life for Harry.  I guess something in me needs the bad guys to become good guys.  I wonder what happened to Dudley?

I’m totally not bragging here (actually, yes I am), but I saw the Snape thing coming.  At the start of this last book, I even went on record with Hubs (who read it before me), saying, "I KNOW Snape is still a good guy."  That was very satisfying, and when we learned that Harry’s middle son had the middle name of Severus…well, a big sob got caught in my throat.

Speaking of sobs, the scene where Harry finally got to talk to his parents in the woods, just before he thought he was dying…was that the most heart-wrenching thing you’ve ever read?  I positively howled, and books almost never make me cry.

And, I think I may have missed this–who ended up raising Teddy Lupin?  Was it Bill and Fleur?

And then–oh, then–there was The Kiss.  When Hermione planted that big one on Ron I nearly came right out of my skin.  And I also nearly woke up Hubs and planted a big one on him in celebration, but since it was 1 am, I restrained myself.

Do you think there’s any chance for another series?  Maybe Harry as an adult?  Or little Albus and his friends?  I know, probably not.  A girl can hope.

I know I’m leaving out a dozen observations that were coursing through my brain last night.  I was so eager to find out what happened that I probably read it too fast.  I’m actually thinking about re-reading more slowly, so I can pick up on everything I missed last time.

Go ahead–fire away in the comments section and share your favorite and best thoughts about that wonderful world of Harry.  I don’t know when I’ve been so sad to see a book–and series–end.

81 thoughts on “Wild About Harry”