Last week Hubs and I celebrated our 15th wedding anniversary, and he surprised me with a weekend getaway of such perfection that all future weekend getaways will surely develop inferiority complexes.

"We're going to a place called Aaron's Gate," he told me, "a few miles outside of Guthrie, Oklahoma."

(I am not a native Oklahoman.  I had never heard of Guthrie.  It's such an interesting and picturesque town that I'll have to wait and give it a post all its own, very soon.)

Hubs and I have stayed in some lovely places during our years together, but this place takes the cake.  Photos, of course, won't do it justice, but I'll do my best.

We headed in the general direction of Guthrie, Oklahoma, turning off the interstate to drive on about ten miles of this: 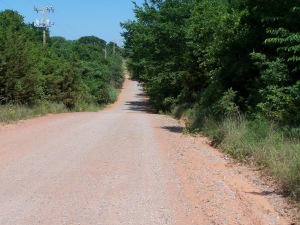 When we had officially reached The Middle Of Nowhere, we pulled up to the front gates: 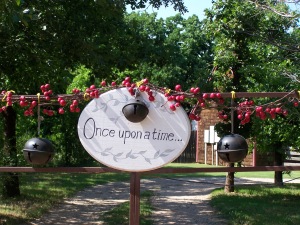 Once inside the gates, we wound through the woods:

…and we pulled up to our unassuming little cabin:

When we got out, we immediately noticed the quiet.  No traffic, no people, no sounds at all–just the birds, the wind, and the crickets.

We opened the door to the cabin, and this is what we found: 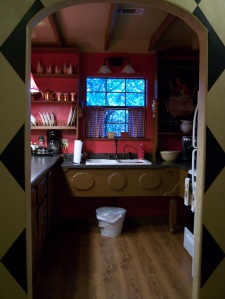 (Behind this armoire was the giant television and DVD library.  We watched a lot of movies, including the very excellent HBO series on John Adams.  Because, you know, nothing says "romance" like a bunch of men in wigs and tights declaring their independence from the King of England):

A hot tub in the screened-in porch.  My fingers are permanently pruned from all the soaking: 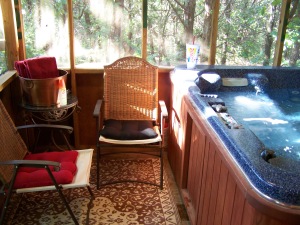 They left us our dinner and the next day's breakfast in the fridge.  By this point, I was so smitten with the place that I half expected little mythical woodland creatures to show up and prepare the food for us: 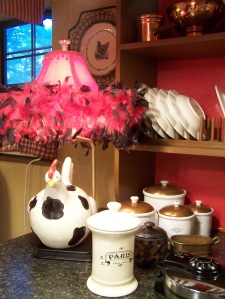 ("WHY ARE YOU TAKING PICTURES OF A CHICKEN LAMP?" Hubs asked at this point.  Fair question.)

The weekend was perfect, and I have found my new favorite little spot.  We agreed that if someone couldn't relax in this quaint spot, then they just couldn't relax.

Last picture, I promise, on our way back out of the gates as we left: 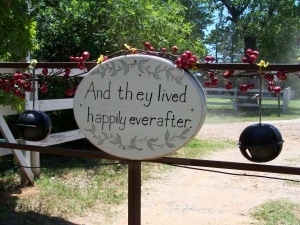