I didn't grow up in Oklahoma, so unlike my own children, I didn't have the benefit of years of Oklahoma history in school.  It's a shame, really, because the interesting lore and culture of my adopted state endears it to me more and more all the time.

I mean, there are 306 million people living in the United States, but only three-and-a-half million of us get to live in a state that actually inspired a Rodgers and Hammerstein musical.  Not to mention a Tom Cruise/Nicole Kidman movie.  (I loved that movie.  It came out in 1992, before I was a married woman and before Tom was a couch-jumper.  And let me tell you that it was very pleasant sitting a dark theater, watching a close-up shot of Tom whispering "Marry me, Shannon."  "Okay," I whispered back.)

When Hubs first told me we'd be having a romantic anniversary getaway a few miles outside of Guthrie, Oklahoma, I was skeptical.  "What's in Guthrie?" I asked.

A lot, it turns out.  It was the original state capital of Oklahoma, and it was the headquarters of the famous Land Run of 1889.  This picturesque little town is home to a huge historic district, meticulously maintained and restored.  During our trip, Hubs and I spent an afternoon taking in the history. 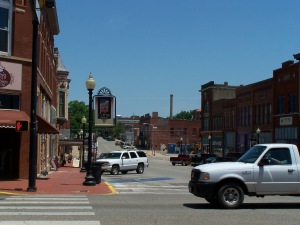 I have an unhealthy obsession with historical markers.  My idea of a dream vacation is to stop at every single one of them: 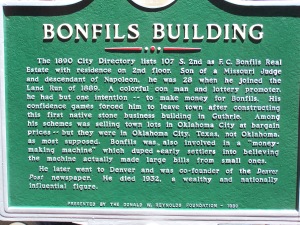 We stopped at an old drugstore that had been turned into a museum.  It was an interesting look at the  pharmaceutical history of the late 19th and early 20th centuries.  Half the remedies in there included "cocaine" and "heroin" as ingredients.  No wonder Aunt Eller was so moody. (I also saw with my very own eyes a particular piece of turn-of-the-century medical equipment that is horribly seared into my brain for all eternity.  I'll spare you the details, but let's just say we should all thank our lucky stars not to have been constipated in 1903.)

Parts of the original brick sidewalks and streets could be seen throughout the district.  Together with the old buildings, it was hard not to let the imagination run wild.

Hey look, another historical marker, and this is a good one:

Hubs turned to me.  "Do you realize Tom Cruise and Nicole Kidman staked their claim RIGHT HERE?"

37 thoughts on “Where the Wind Comes Sweepin’ Down the Plains”