I saw the Grand Canyon yesterday, and none of my children fell over the edge, which is a good measure of a successful day at the Canyon, I’d say.  The real measure of a day at the Canyon, in which I try to put into words what I saw–well, that eludes me.  For centuries, people have tried to capture that spectacle in words, photos or paintings, and for centures, they have fallen short.  I’m not sure I’m qualified even to try.

For starters, we saw this: 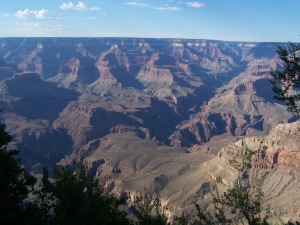 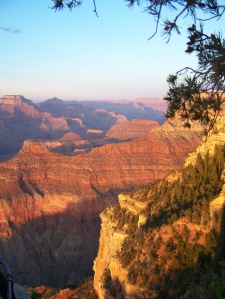 My oldest son became pensive, remarking that standing on the edge of the Grand Canyon makes you realize how small you are.  My youngest son coped with the philosophical enormity of that observation by hocking a loogie over the edge.  My four-year-old daughter seemed unable to take it all in (she asked us which of the Disney Princesses we could expect to find there).  I think she thought she was looking at a giant painting, a feeling I can certainly understand.  I felt as if I stood at a masterpiece in the finest museum, my jaw hanging open at the creativity of an Artist who wields a river as a paintbrush. 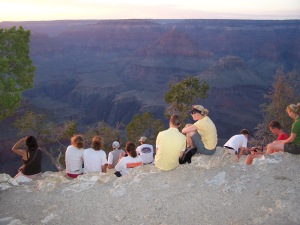 We stayed long enough to watch sunset, a spectacle we’d been told we didn’t want to miss.  Though the crowds had thinned through the late afternoon, a large gathering had assembled at the recommended lookout.  Several brave souls sat right at the edge, their hiking shoes dangling over the precipice.  There was a rumble of friendly conversation all around us, much of it in French, Japanese, Spanish and German.

The sun began its final disappearing act, lowering to touch the western edge of the canyon.  The conversation around us slowly quieted.  We all watched the vanishing sun, vaguely recalling our mothers’ warnings that we’d burn our eyes, but how could we look away?

The sun turned very quickly into a semi-circle on the horizon.  A last, giant burst of orange and purple exploded across the canyon walls to the east.  A few people gasped.  My sons began a countdown: “eight…seven…six…five…” 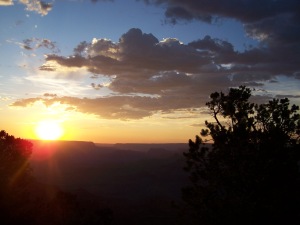 “Down, down, down,” my daughter whispered.  There was just a sliver left.

And then it was gone.  The dusty, sunburned, multi-lingual crowd spontaneously erupted into applause, the sound of our claps disappearing instantly into the depths around us.  It was such a small thing to do, to clap for the sun and the Canyon, two giant forces so much bigger than any of us, and entirely out of our control.  But we did it anyway.  I guess there’s just something in us that needs to say thank you.