"I will not get a dog," I said. There's just too much craziness going on right now. Things are too busy, and I cannot possibly have another life form dependent upon me at the moment.

Never mind that children have begged and read books about canine obedience and have DVR'd The Dog Whisperer until it can't be DVR'd anymore.

Never mind that my sweet eight-year-old boy loves dogs to the core of his being, and he's needed a boost of something special this year.

Never mind that the book is almost done and a little whiff of Normal seems to be (Lord willing)  just around the corner.

I will not get a dog.

For reasons completely unknown to me, late one night my typing fingers made their way to Petfinder.

And I saw this guy:

He'd been living in a rescue for four months.

I looked at his picture and tried to explain that I'M NOT GETTING A DOG.

His picture looked back.

And I am entirely besotted. Deadline, schmedline–sorry, Editor O' Mine, but I can't work today because I have to sit on the couch with this puppy curled up in the crook of my leg. There's really only so much work that can be done with a wet puppy nose rested on your laptop.

He's one-half Corgi and one-half Havanese. His name is Toby, although in keeping with this family's tradition to bestow multiple nicknames on anything that moves, he's also known as Tobalicious, Toby Wan Kanobi, Totally Tobular, and Tober Meister Meister Tober.

The rescue organization did the best they could, but he was surrendered by a breeder–his first four months were spent entirely in a kennel. He is painfully timid, and the poor thing now finds himself smack in the middle of the Loudest Family In America. But the kids, to their credit, are so eager to woo him back to confidence that when they bicker over whose turn it is to cuddle him, they bicker in whispers, so as not to frighten him.

In what has been a swirly season of book-writing, and a double-soccer season, and swine flu, and scout campouts, and a hundred other frantically frantic obligations that keep us out of breath, enter Toby, to slow us down. Love something together. Give of ourselves together, as a family, to pull this little guy out of his shell. It may be the sweetest time we've ever had.

So Internet, meet my Toby: 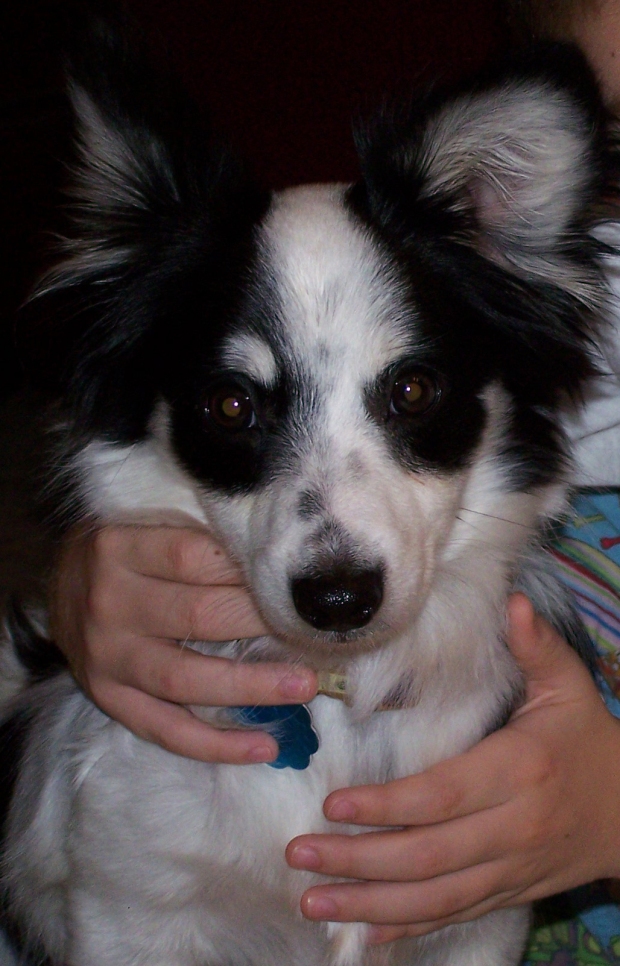 He's a 12-pound, eight-month-old bundle of Just Exactly What This Family Needed.