In February, Hubs and I started remodeling our master bathroom.

More accurately, I should say that in February, Hubs and I casually wondered what was under the wallpaper, so we peeled a corner. Which revealed damaged drywall. Which revealed a roof leak. Which revealed the need to scrape popcorn from the ceiling. Which meant we might as well DO THE WHOLE BLASTED THING. (Ah, sweet togetherness.)

Four months, a few tears, some sore muscles and maybe a teeny-tiny argument or two (*cough*) later, and we are finished. And we got just exactly the look we wanted.

t first, a "before" shot (these were the photos I took after my paper-bagging-walls experiment, which ultimately worked out okay, but not great. It was pretty much intended to be a short-term solution to buy us some time): Oooo, it's dark in there, isn't? I feel like I need to put on a headlamp to do anything. Here's the new version: 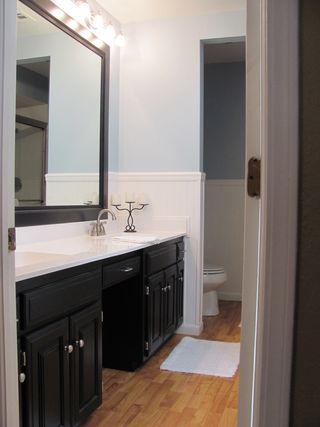 Another "before" shot, of the tub area:

Love this new version MUCH better (and we saved skads of money by using beadboard instead of tile as the tub surround): 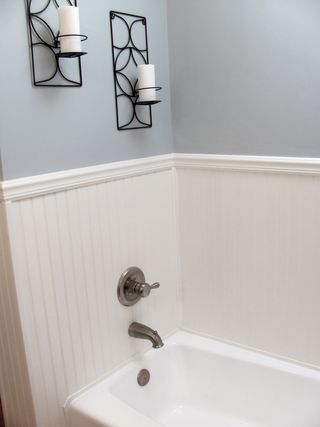 (And by the way, yes, it's waterproof. We followed the advice of an issue of This Old House magazine and silicon-caulked the fire of that baby, inside and outside the beadboard.)

I don't have a "before" shot of the old closet located right behind that tub. Suffice it to say that it was great storage space, but the closet door was always opening up into traffic flow and driving us nuts. So we took the door off entirely and made it open shelving:

Look at those tidy shelves! DISCLAIMER: I have never lived a day in my life with my closets looking like that–this is just the staged version (more on that in a minute). Normally, you'd see mis-matched towels folded by a five-year-old, multiple expired bottles of Maalox, and three or four knee braces. But this looks much nicer, no?

(Originally I planned to put up a white shower curtain with black grommets over that closet space. But I love the openness so much I've left it like that.)

Last shots…here's a "before" of the toilet area: 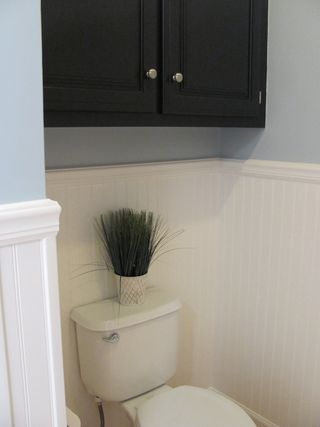 One last thing, because I seriously need some kudos for this one: For the first (and, I might add, last) time in my life, I painted the insides of the cabinets to make them spiffy: 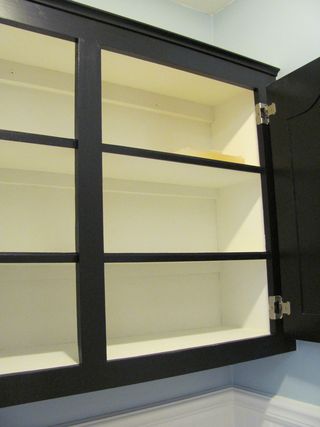 Isn't that pretty? It's kind of a shame to fill it up with toilet paper and band-aids after all that work.

So ANYWAY, the reason for all the staging is that we finished this bathroom on a Thursday and (oh, Irony, you pesky old friend) on the next Friday, we moved out. Vacated. Gone. We'd known a move was likely imminent for us, and we redid the bathroom with resale value in mind. But we didn't realize it would be quite THAT quick. So now we're gone, hoping that all the people walking through our on-the-market house are enjoying it, since we, um, never quite did.

(Speaking of which, does anybody want to buy my house?)

(P.S.  The paint color of the walls is Sherwin Williams "Sleepy Blue", and the cabinets are painted Valspar "Dark Kettle Black".)